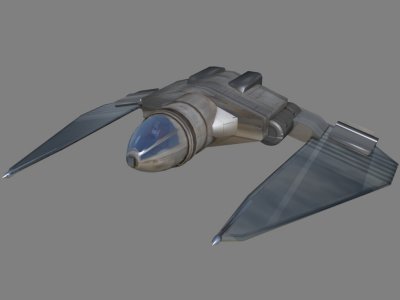 *: This fighter features a standard Verpine stabilization cockpit, this enables the fighter to perform incredibly agile twists and turns while retaining a stable firing platform. Should the fighter take heavy damage, and the system fails (a 1-2 on the damage roll) then the system fails and maueverability drops by 2D, fire control drops by 1D and Space Speed drops to 9 and atmosphere speed drops to 350;950kmh.


Description: With the A-Wing fighter was a superb starfighter during the years of the Rebellion, due to its incredible speed and manueverability, however once the New Republic was formed instead of convoy raiding the A-Wing was pressed into service as an escort fighter, a role it was ill suited to, but against the remnants of the Empire this made little difference since it still totally outclassed the Tie Fighters that it was put up against. But when the Republic was faced with threat of the Sith/Empire alliance, and the upgraded fighters they were fielding, the Republic began looking for a new fighter to replace the A-Wing, this is a design from Slayn and Korpil which was bought for some specialist squadrons. The fighter is fast, powerful and extremely agile although suffers from some of the disadvantages inherent in Verpine vessels, but the combination of powerful laser cannons, concussion missiles and extremely long range AutoBlasters allow it to engage a variety of targets with a high probability of success. The Republic has bought a few of these fighters for assault squadrons, teaming them up with B-Wing fighters to standardise parts and maintanence as well as allowing the different fighters to complement each others weaknesses.

Page designed in Notepad, logo`s done in Personal Paint on the Amiga.
Text by FreddyB. Image by "Bob the Dinosaur", copyright remains with him.
Any complaints, writs for copyright abuse, etc should be addressed to the Webmaster FreddyB.