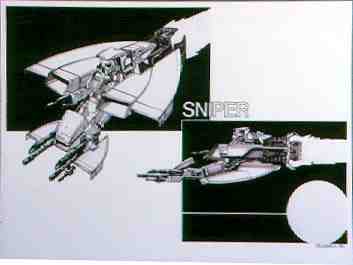 Description: As the Empire crumbled after the Battle of Endor, it was forced to change its tactics, adapting itself to fighting the New Republic on a level standing. This meant that Imperial tactics were often changed to mimic those that the Rebel Alliance had mastered during the early years of the Galactic Civil War, including the use of Air Speeders to strike quickly and accurately against enemy armour as it manuevered into position for strikes against Imperial bases. The Sniper is their adaptation of Speeder Bike design that the Empire put into use, a hybrid vehicle easily handled by Scout Troopers trained to operate Speeder Bikes, it has the speed, altitude capability and heavier weapons of an Air Speeder, allowing it to devastate infantry, and cause problems for armour. However although the Pilot has armoured plates partially covering him, he is still open to the elements, and open to hits by enemy fire, making this vehicle more vulnerable to enemy attacks than a fully fledged Air Speeder, but this was considered a good trade off, for a vehicle which could be easily put into service with minimal extra training for the crews involved.


Page designed in Notepad, logo`s done on Personal Paint on the Amiga.
Text completely by FreddyB. Images is by Kenner Toys, and is of a design for a post Return of the Jedi series of toys, copyright resides with the LucasFilms.
Any complaints, writs for copyright abuse, etc should be addressed to the Webmaster FreddyB.