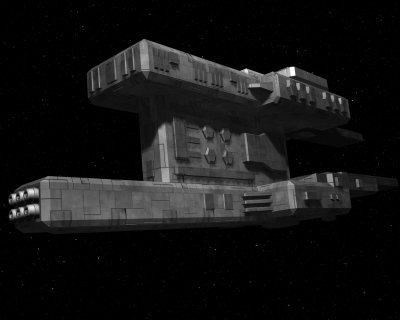 Description: The Spacka Class Cruiser predates the Old Republic, these vessels were one of the first mass produced planetary defence vessels ever built. Being produced and distributed inside massive cargo container vessels, the Spacka's themselves were not seen as economically needing a hyperdrive since they simply patrolled and defended a single star system. Later refits to the design added a hyperdrive at the expence of some of the abundant cargo space, also later on standard laser cannon turrets were added to the vessel to round out its weapon load. The original design is armed only with 6 Heavy Particle Cannons, these were far more powerful than the lasers of its day, but are short ranged weapons, and the front mounting leaves the Spacka vulnerable to its sides and rear. Spacka's are extremely rare due to their age, but some very few examples of this once groundbreaking design remain in service having been sold off to low technology and frontier worlds, where they are incapable of dealing with modern warships, and are outclassed by Old Republic and Clone War era vessels.