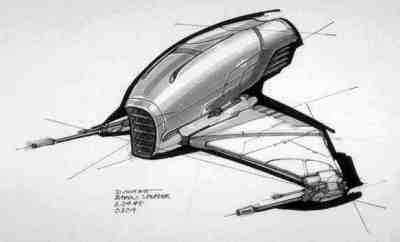 Description: Much like the Empire that defeated it, the Trade Federation produced a huge variety of different combat vehicles as it attempted to find the most economic and deadly, it also seemed to relish giving these vehicles ridiculous acronyms another thing in common with the Empire. The SPACS is one of the many Air Speeder clones that the Trade Federation created as an air superiority fighter for their Droid Armies. The SPACS unlike many of the other weapons of war used by the Trade Federation is a vehicle and not a large droid.They eventually settled on using Droid Starfighters, however the earlier SPACS had been mothballed, and were stored in their thousands in Trade Federation warehouses across the galaxy. When the Empire siezed these warehouses, they sold off the contents in an attempt to recoup some of the immense cost of the Clone Wars. And while the cockpit is cramped and uncomfortable, and the SPACS is not the fastest or most capable air speeder, they are a cheaper and readily available resource for governments and individuals who need air speeders, or air speeder support.