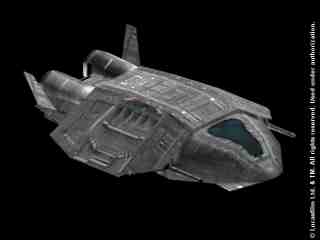 Description: Although AT-AT walkers and Speeder Bikes were fine for the assault and scouting roles they were designed for, the Empire needed a vehicle that could transport troops around planets to areas where they were required. The Republic Assault Gunships which had been used by the early Clone Troopers were a perfect example of this, but the cost and manpower involved in operating these combat vehicles as simple troop transporters was high, so the Empire approached Aratech, the designers of the 74-Z Speeder Bike that the Empire had purchased in such massive numbers. They designed this, an Air Speeder capable of transporting a number of troops and their equipment quickly and safely to their destination. Although not well armed or armoured, this Troop Transport fulfilled the Empires requirements perfectly and was acquired by the Empire in its thousands. Aratech still only manufactures the Troop Transport exclusively for the Empire, but planets which have shrugged off Imperial control often have these vehicles, and sell them in attempt to relieve themselves of reminders of their occupation.