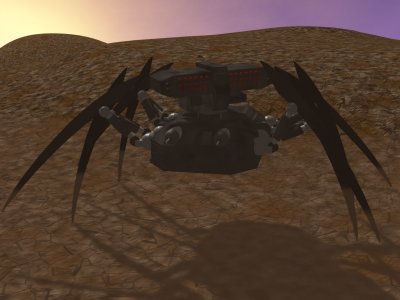 Description: Impressed with the effectiveness of Imperial Walkers, the Mandalorians copied the idea, however instead of just making the massive transports and scouts that the Empire uses, the Mandalorians adapted their own tank designs to take advantage of Walker technology. The Spider is a heavy missile launcher, designed to back up Mandalorian forces with long range weapons, providing bombardment of enemy positions and artillery cover for Mandalorian troop movements. In this role the Walker has proven itself over and over, and the Mandalorian forces have been extremely happy with the walkers success rate. However individual crews dislike the Spider because of its indirect role in any combat, with its long range weapons meant to be used many kilometers from the battlefield where the vehicle itself can remain out of danger. Also, although the walker has anti personel weapons, its main launchers are designed for extremely distant targets, making the vehicle weak against other walkers when they have managed to close the distances between them. Despite these gripes, the Mandalorian government is extremely happy with the Spider, and looks set to continue ordering them as heavy artillery and walker destroyers.

Page designed in Notepad, logo`s done on Personal Paint on the Amiga.
Text completely by FreddyB. Image is by "Bob the Dinosaur", copyright resides with him.
Any complaints, writs for copyright abuse, etc should be addressed to the Webmaster FreddyB.