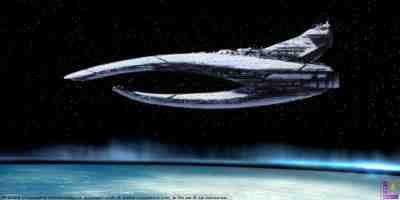 Description: Although the Emperor Class Star Destroyer was new, and still only available in very limited numbers to the new Sith/Imperial alliance, the Sith themselves wanted to stamp their mark on the Empire and demanded a new type of Star Destroyer, smaller and more numerous than Super Star Destroyers, but still more destructive than anything previously available. The Sith Class Star Destroyer was the result, and although this led to some confusion with the naming of the vessels (as SSD ???? stood for both Sith and Super Star Destroyers), they Sith were happy with the result. Far more destructive than previous vessels, the Sith Star Destroyer is based on an older sith design, and the massive capability of this vessel in both firepower and fighter capacity meant that it could outfight most other starships with ease. However the amount of these built was relatively small because Imperial forces felt it was somehow unloyal to Emperor Palpatine's memory and very few were ordered, especially as cracks began to show in the alliance.