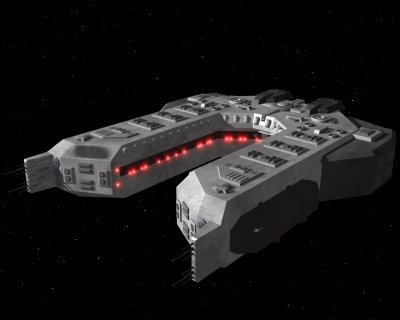 Description: As Starfighter design has evolved it has become possible to mount larger and larger weapons aboard these small vessels to such a degree that during the Galactic Civil War Starfighters started to become serious dangers to Capital Ships. While the Empire attempted to deal with this problem by creating anti starfighter platforms such as the Nebulon B Frigate, designed to defeat starfighter attacks before they could breach a convoys perimeter and destroy the more vulnerable capital ships at the fleets core, however this was only partially successful. This continued until the Battle of Endor where the superiority of the Starfighter was finally proven when Rebel starfighter attacks alone managed to destroy the Super Star Destroyer Executor, the sacrifice of a few dozen Rebel pilots managing to defeat the thousands aboard the massive capital ship. After this point in history, it became clear that Capital ships to be successful had to carry tremendous numbers of starfighters, and the older concept of the carrier became popular once more. After the New Republic captured the shipyards of the planet Rothana, they turned the production facilities to the production of a new class of powerful carrier vessel which would dwarf a Star Destroyer. The Star Nest Carrier was the result of this, and although very few of these vessels have been constructed, their huge hulls carry almost a thousand starfighters, dropping these off and then staying out of trouble at the edge of the battlefield acting only as a resupply and repair depot. Star Nests have become extremely important to the New Republic, although there are difficulties supplying them with enough starfighters, meaning that the numbers of fighters aboard are often made up from mismatched and outdated fighters, however even given this fact the sheer numbers of fighters that the Star Nest can launch (a quantity which is only beaten by the massive Imperial Arc Hammer Command Vessels) makes it a pivotal force in any battle it joins. Some Republic commanders have criticised the relatively small numbers of anti-starfighter weapons it carries for a vessel in its chosen role, with criticism of concussion missiles as its anti-starfighter weapon of choice and the vulnerability of the vessels sides with only 5 launchers protecting each side, but the designers have pointed out that the carrier should be screened by its own fighter complement rather than being left to fend for itself.