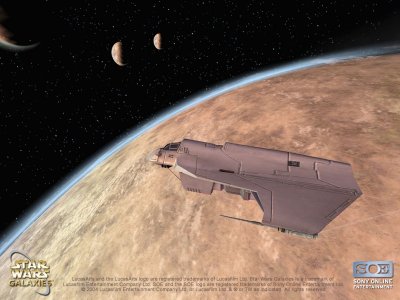 Description: The StarRay Transport was released by Santhe/Sienar as an attempt to regain sales as the failing Empire accounted for an ever shrinking market. Sienar which had always been a large supporter of the Empire and its constant defeats by the New Republic meant that Sienar was suffering financially and couldn't rely on the Empire for its profits. The StarRay was designed quickly, mainly just an updated version of the TAG-17 which had been released in small numbers to the Empire as a possible replacement for the Lambda Shuttle, but was not adopted in large numbers due to the Battle of Endor and the chaos that followed as well as Imperial plans for a continued lifecycle for the Lambda Shuttle. The TAG-17 used elements of the SkipRay BlastBoat, and was equipped with turrets and missile weapons for defence, but the Empire sold off these vessels as surplus leading to some confusion when the TAG-18 was released using commercial parts instead of the military quality systems used in its older brother. But pilots of TAG-18's loved the confusion caused by the military grade TAG-17's scaring off pirates and raiders, as well as the easy maintanence and modification of their vessels due to the designs military ancestry.


Page designed in Notepad, logo`s done on Personal Paint on the Amiga.
Text completely by FreddyB. Image is from Star Wars: Galaxies: Jump to Hyperspace, copyright resides with Sony/LucasArts.
Any complaints, writs for copyright abuse, etc should be addressed to the Webmaster FreddyB.