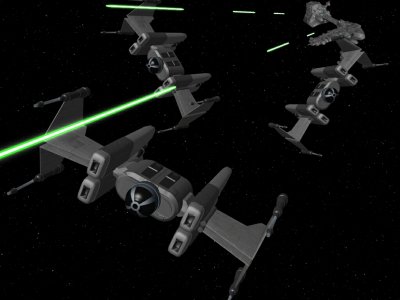 Description: The two most famous fighters throughout the Galactic Civil War, were the Incom T-65 X-Wing Fighter and the Sienar Fleet Systems Tie-ln Fighter, this inspired many attempts at copying their success. The Star Sword is one such attempt, but instead of copying one fighter or the other, the Star Sword attempts to copy both fighters, creating the wide X arrangement of powerful laser weapons, in an affordable and manueverable fighter. Although not really better than either fighter it was emulating, the Star Sword is a very good fighter in its own right, fast and powerful, making it popular with those not wanting to appear to side with either of the major governments in the civil war. The Star Sword has been popular with independant governments, and mercenary forces, where its capabilities, and power have been successfully demonstrated time after time.