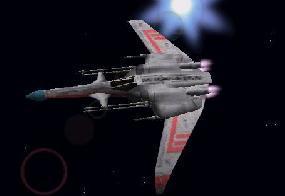 Description: The T-42 starfighter was in development before the X-Wing, and was a continued development of the Z-95, but work feel behind and the X-Wing was finished first. The nationalisation of Incom by the Empire stopped the work completely, and it was not continued until Incom was refounded under the New Republic. With the X-Wing being sold exclusively to the New Republic and the "Tee" Wing which had been developed during their Imperial owned years which was now outdated, Incom lacked a fighter for the open market. So the T-42 design was finished off, but due to advances in technology the fighter was somewhat of an improvement on the X-Wing, so was restricted as government purchasers only. To avoid this Incom reclassified this vessel the T-84, and designed a cheaper verson for the open market which remained the T-42. The T-42 Star-Wing is a fast fighter, which is equipped with both Laser Cannons and Ion Cannons, having lost the Proton Torpedo Launchers to make it legal for civilians to buy the ship. A weaker hyperdrive and shields leave a larger cargo space than the T-84 variant, and make the vessel barely more expensive than an X-Wing fighter.


Page designed in Notepad, logo`s done on Personal Paint on the Amiga.
Text completely by FreddyB. Images in by Unknown, copyright resides with them.
Any complaints, writs for copyright abuse, etc should be addressed to the Webmaster FreddyB.