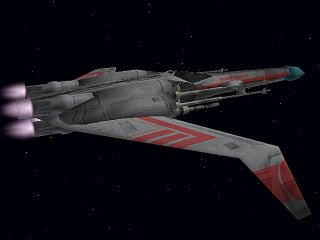 Description: The T-42 starfighter was in development before the X-Wing, and was a continued development of the Z-95, but work feel behind and the X-Wing was finished first. The nationalisation of Incom by the Empire stopped the work completely, and it was not continued until Incom was refounded under the New Republic. With the X-Wing being sold exclusively to the New Republic and the "Tee" Wing which had been developed during their Imperial owned years which was now outdated, Incom lacked a fighter for the open market. So the T-42 design was finished off, but due to advances in technology the fighter was somewhat of an improvement on the X-Wing, so was restricted as government purchasers only. To avoid this Incom reclassified this vessel the T-84, and designed a cheaper verson for the open market which remained the T-42. The T-84 Star-Wing is a very well armed fighter, with Ion Cannons, Laser Cannons and Proton Torpedo Launchers, the vessel is also very fast, with an additional engine slung under the main body and a 0.5 hyperdrive system making it far more suited to the role of an interceptor than the X-Wing. The only problem with the design is its extremely high cost, which has somewhat scared of government buyers, who see other military ships as better value for money. However the T-84 Star-Wing is generally seen as the best starfighter currently in service with the Republic, and many see it as the true successor to the X-Wing rather than the various X-Wing variants or the E-Wing.