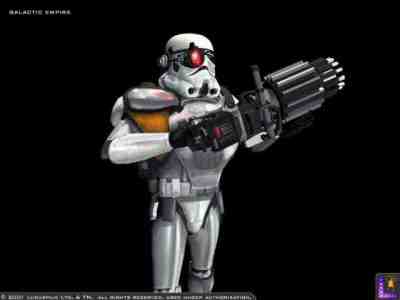 
Although Stormtroopers are the elite soldiers of the Empire, the massive numbers in which they were deployed meant that their training suffered. The Storm Elite are a new subset of the Stormtroopers, where experienced troops are taken into a new training regime which is based on the training recieved by the Emperors Royal Guard. Once they have successfully completed that, they are issued with new equipment and assigned to Storm Elite squads. These squads are sent to only the most critical of missions and locations, often being teamed up with Royal Guardsmen or Imperial Inquisitors. The Storm Elite are completely seperate from the normal chain of command, serving completely on the orders of the Emperor.
Dex: 3D
Blaster: 7D
Dodge: 7D
Brawling Parry: 7D