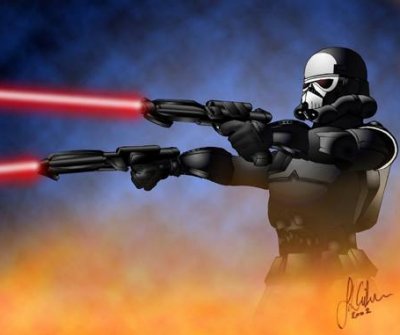 
While many of the Empires problems were solved through the massive firepower of the Imperial Fleet, and through the masses of StormTroopers available to its military forces, sometimes a more subtle hand was needed. While the Empire could rain down fire on an enemy planet, sometimes the requirements needed to subjugate a technologically advanced world would destroy the manufacturing and economic base the Empire was attempting to capture in the first place. However by taking out key military and political leaders all opposition would crumble and the Empire could move in almost completely unopposed.

Storm Executioners were the tool of choice of the Empire, specially trained assassins and infiltrators, used to destroy important installations, information and equipment, and to kill leaders and strategists. Although equipped with their trademark deaths head Stormtrooper armour, they would often operate in disguise, worming their way into positions where they could strike, or in times of urgency they would break codes, pick locks, kill and steal, whatever they needed to do to break into the place they needed to be to strike at that critical moment.

Page designed in Notepad, logo`s done on Personal Paint on the Amiga.
Text completely by FreddyB. Image is by Unknown, copyright resides with them.
Any complaints, writs for copyright abuse, etc should be addressed to the Webmaster FreddyB.