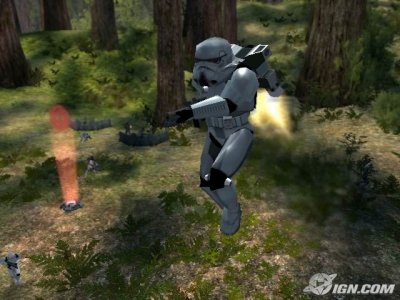 
Imperial Stormtroopers like their forerunners the Clone Troopers have to operate in a variety of different environments, so specialised variants have been equipped and trained to better operate in these special environments. Like the Seatroopers and Snowtroopers, the Skytroopers are basic Stormtroopers but equipped with special armour, in this case armour equipped with a built in jetpack. This Jetpack allows the Skytroopers a great deal of manueverability and speed with which to deal with changing circumstances on the battlefield, making them a highly desired resource for Imperial Generals and Army Commanding Officers. However the expence of equipping these soldiers has kept their numbers low and generally they are only assigned to planets which really require the use of Jet Packs such as Bespin and other worlds with floating cities. Although more poorly trained and equipped than their Clone Sky Trooper ancestors, the advancing pace of technology means that their Jet Pack and Armour actually performs slightly better giving these troops an edge in combat which they use to great advantage against their opponents.

Page designed in Notepad, logo`s done on Personal Paint on the Amiga.
Text by FreddyB. Image is by LucasArts (from the IGN website, from the game Star Wars:Battlefront), copyright resides with them.
Any complaints, writs for copyright abuse, etc should be addressed to the Webmaster FreddyB.