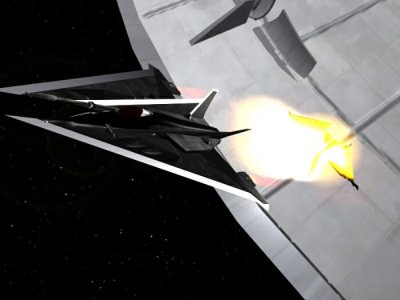 * : The Wings of the Switchblade are edged with a hyperdense material, which is sharpened so that it can cut objects on a particle level. This means that the Switchblade can actually damage targets by colliding with them. However if it should fail to achieve damage, failing to cut through the target, then the collision will probably destroy the fighter.


Description: The Switchblade was an innovative idea, designed with sharpened wings so that it could perform slashing attacks against targets, severing capital ship sensors, etc. However this left the fighter unable to use shields, and an obvious target as it charged in against an enemy vessel. The system also was not perfect, and although the vessel could often cut its way straight through a target, all too often it would simply smash itself across the enemies hull. However the idea was well advertised and became popular for a short time, until the holo's of the spectacular deaths of desperate and suicidal pilots began to propagate across the galaxy. The Switchblade's production was then made illegal due to safety concerns, and interest in the design began to drop off, the vessel is now just another abandoned design, which sees moderate use across the galaxy, especially with the stupid or brave pilot who thinks they can successfully pull off manuevers with the fighters Razor wings.