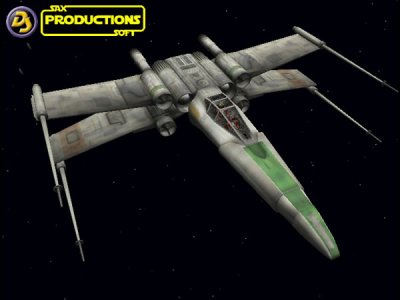 Description: The T65-t4 is an enlarged version of the normal X-Wing fighter, carrying a pilot and a gunner as well as the standard Astromech, allowing the pilot to concentrate on avoiding enemy fire while the gunner takes out enemy targets. Although not carrying any more weapons than the standard X-Wing, the laser cannons have been replaced by heavier versions for extra damage and the torpedo launchers firelinked to add more punch. Other enhancements include an extra 3 engines which improve the fighters space speed, although its extra size slows it in an atmosphere, and tougher hull armour, shielding, larger cargo space and torpedo capacity making this a powerful starfighter. However the Rebellion never built many of these fighters due to the extra crew requirements, instead using the few they did construct as trainers adding secondary controls so an instructor could sieze control if required, due to the very nature of the Rebellion these vessels did end up in combat especially in defence of Rebel training and recruitment centre's.

Page designed in Notepad, logo`s done on Personal Paint on the Amiga.
Text completely by FreddyB. Image is by Darksabers Opt Station, copyright remains with the models creator, David Wyatt (The Saxman).
Any complaints, writs for copyright abuse, etc should be addressed to the Webmaster FreddyB.