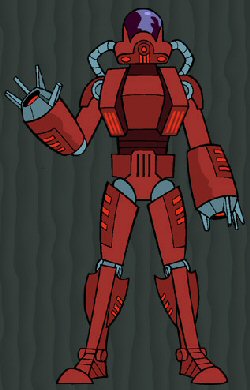 Description: Created by a secret subset of Tagge Industries, the L8-L9 was a prototype battle droid meant to possibly serve as infantry in environments too hostile for the Republic's clone troopers. An unsolicited project, it was the brainchild of young Baron Orman Tagge, a prodigious technocrat that sought to further ingratiate himself with Supreme Chancellor Palpatine's government. He led the experimental automated trooper project and planned to secretly test it under extreme conditions. He kept it secret for several reasons -- on a practical level, battle droid development had been restricted following the fallout of the Battle of Naboo. Contacts within the House of Tagge uncovered Rattatak, and Tagge ordered the L8-L9 to be tested there. L8-L9 was a humanoid droid with advanced servomotors and equilibrium centers that gave it increased agility compared to most battle droids of the era. Its arms contained plasma cannons and flamethrowers giving it built-in heavy firepower. The L8-L9 proved to be a failure, having been destroyed by Asajj Ventress. Tagge didn't abandon the idea, though, and following the rise of the Empire, he commissioned the Z-X3 project as a possible supplement to Imperial stormtrooper ranks.


Page designed in Notepad, logo`s done on Personal Paint on the Amiga.
Stats by FreddyB. Descriptive text by StarWars.com Image is by Lucasfilm, and copyright resides with them.
Any complaints, writs for copyright abuse, etc should be addressed to the Webmaster FreddyB.