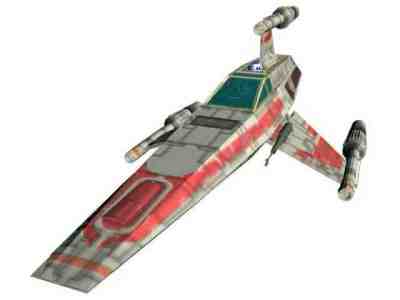 Description: After Incom was nationalised by the Empire, and their designed team had defected to the Rebel Alliance, the company was left without a starfighter to produce for their new masters, since all prototypes and design schematics had been removed along with the design team. The "Tee" Wing starfighter was the result of some rapid design work and testing, a light starfighter with many parts and concepts in common with the Tie Fighter. The Tee Wing is a mixture of design concepts from both the X-Wing and Tie Fighter designs, producing a cheap, disposable vessel, abeit one equipped with shields and a hyperdrive. The Empire however showed little interest in this fighter, and after a short production run, the control of Incom's factories were turned over to Sienar and Incom was shut down as a corporate entity, at least until its resurgance under the New Republic. The production run of the Tee Wing however sold well, a cheap fighter with common and reliable parts, which performed comparibly well to other starfighters available at the time, the ships were snapped up by corporations, planetary governments, and often by less legal groups such as pirates and privateers. The Tee Wing design has not been resurrected along with Incom, who now almost exclusively produces the X-Wing for the New Republic, but many pirated copies of the fighter have now flooded the market, and the Tee Wing continues to be a common sight throughout the galaxy.