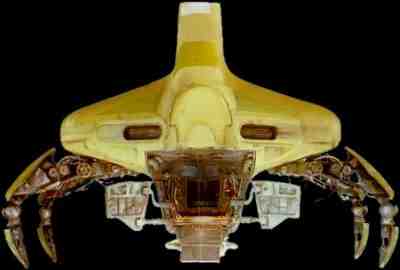 Description: The Trade Federation Landing Shuttle was a small landing vessel designed to carry the small organic crews of Trade Federation Cargo Ships to and from planetary surfaces. Modified versions of this vessel also were used by Trade Federation Ambassadors and Negotiators as personal vessels, however this would require extensive refitting as the hyperdrive and range of this shuttle were extremely poor. After the Trade Federation was defeated during the Clone Wars and its assets seized by the Empire, these shuttles were sold off onto the open market, however they were not a popular purchase as their small size and poor quality systems made them an extremely poor investment, leading to their second hand price crashing to that barely higher than a land speeder. These days these shuttles are usually only used as interplanetary vessels by those who cannot afford a better ship, and as spare parts become even harder to obtain these vessels will eventually be retired from service completely.