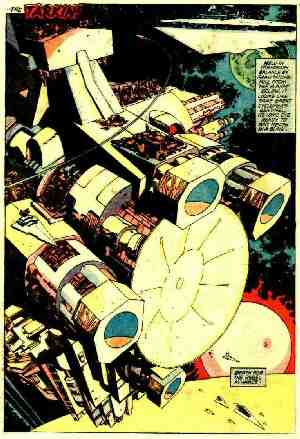 Description: In spite of the Death Star’s failure at Yavin, the superlaser concept was not abandoned. Too much funding and research had gone into the design and construction of the weapon to desert the idea simply because of a single flaw in the design. In order to improve the superlaser design, Emperor Palpatine ordered additional research and development.

Picking up where Eloy’s work had left off, Lemelisk and his team designed a superlaser testbed to refine the decades-old technology. This new station was code-named Tarkin to honor the late Grand Moff. The Tarkin’s design combined the basic superlaser and offensive battery of the Death Star with advanced engines and shield generators, and eliminated the Death Star’s infamous exhaust port. Thus, while the main purpose of the Tarkin was to test an improved version of the superlaser for the Death Star II, it was a formidable weapon in its own right, as Rieekan’s statement shows. The Tarkin resembled a gargantuan skyscraper, topped by a giant version of the command towers used by the Empire’s Star Destroyers. Below the tower was the ionic cannon, which was surrounded by the eight tributary beams required to form the superlaser. In theory, the design of the weapon was the same as the Death Star I, but the Tarkin’s laser possessed several refinements later seen on the Death Star II, such as the ability to target capital ships. This ability, coupled with management of the power yields to support increased firing, would turn the superlaser from a single-purpose weapon of terror to a devastating part of naval combat.

Construction began on the Tarkin above the garrison planet Hockaleg, in the Patriim system. While a far cry from the unskilled convicts which were the main workforce aboard the Death Star, the Tarkin’s construction crews were little better, a motley and ill- disciplined lot. The battlestation fell behind schedule, finally nearing completion a few months after the Battle of Hoth. During its construction, the Tarkin was commanded by Colonel Nord, Captain Voal, and General Biel, and Grand Admiral Martio Batch later pulled rank and ordered the nearly completed battlestation into the Dreighton Nebula to destroy the planet Aeten II. Ultimately, however, the Tarkin was to be commanded by none other than Darth Vader himself.

After the station returned to Hockaleg to begin the final stages of construction, it was discovered by a Rebel agent, who managed to steal vital technical data. A commando team was assembled by the Alliance from those who had previously infiltrated the Death Star, in hopes that they would be able to sabotage the station. Once placed in the Tarkin’s workforce, the team began to undermine the construction, little realizing that Darth Vader had arrived to take command of the Tarkin. Vader’s efforts to ferret out the Rebels were undermined by an assassination attempt by the Tarkin’s command staff and the fact that his son, Luke, was a member of the team. While Luke Skywalker had destroyed the first Death Star, it was his sister Leia Organa who ended the Tarkin threat. Infiltrating the Tarkin’s mechanical level, Organa discovered the activating mechanism for the ionic cannon. Using her memories of the schematics of the original Death Star, Organa was able to reverse the polarity modes of the cannon’s fire controls. Thus, when Colonel Nord gave the order for the superlaser to be fired at the Rebel’s escape ship, the cannon shot itself, and the station exploded.


Page designed in Notepad, logo`s done on Personal Paint on the Amiga.
Descriptive Text by TalonCard, Stats by FreddyB. Image is from the Mavel Comics Star Wars Series, copyright resides with Marvel Comics and LucasFilm.
Any complaints, writs for copyright abuse, etc should be addressed to the Webmaster FreddyB.