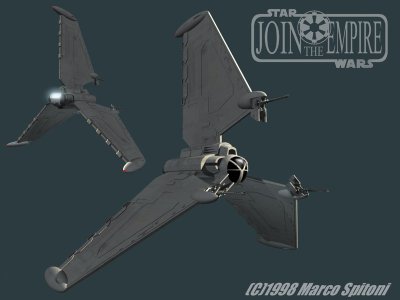 Description: Before the Imperial Gunboat and Missile Boat were developed the Empire made wider use of an another design based on the Lambda and Sentinel Class Shuttles. The Theta Class Patrol Shuttle is a large fighter armed with three laser cannon mounted on pivoting mounts on the forward point of their wings, and with a Concussion Missile Launcher mounted underneath the fighters hull. The combination of these two weapons, the vessels tough hull and long range made these deadly strike fighters, however their expence compared to the far more economical TIE series of fighters limited their introduction to high security areas where they were used for patrolling and defence.


Page designed in Notepad, logo`s done on Personal Paint on the Amiga.
Text completely by FreddyB. Image is by Marco Spitoni based on design images from Return of the Jedi, copyright resides with him and LucasFilm.
Any complaints, writs for copyright abuse, etc should be addressed to the Webmaster FreddyB.