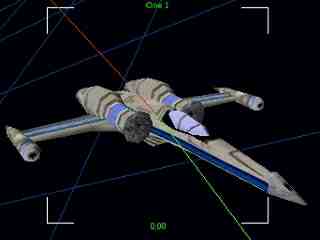 Description: After Incom went onto build the X-Wing fighter, and the Z-95 was phased out of production, SubPro, who had been Incoms partner in the Z-95 Headhunter, was left without a frontline combat starfighter in its product range and with severely diminished sales. With this in mind they designed the Z-105 Thud, a heavily modified Z-95 design, with larger more powerful engines, a similar sensor suite to the X-Wing, heavy laser cannons, a hyperdrive, and many other small refinements to the design. The Z-105 is a powerful starfighter, in some respects better than the X-Wing. With Incom's takeover by the Empire, and the defection of the design team to the Rebellion, the Z-105 was left as the only successor to the Z-95 available on the open market, however threatening movements by the Empire towards the state takeover of SubPro, led to the production of the Thud being abandoned until the New Republic took over. By this time the Z-105 was showing its age, but many planets, and independent groups have been keen to increase their fleets of Z-105's and to update their aging fleets of Z-95's with a starfighter which can use many of the same supplies of spare parts and is similar enough for their pilots to easily learn to control (a character can choose to change a specialisation in Starfighter Piloting - Z-95, to Starfighter Piloting Z-105 at any time they increase the skill (eg Starfighter Piloting - Z-95: 4D, becomes Starfighter Piloting - Z-105: 4D+1 for a cost of 4 Character Points)).