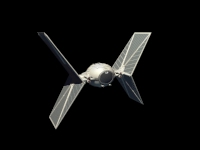 Description: The Tie fighter is as it was designed a Space Superiority Fighter, but was relied upon by the Galactic Empire to control the airspace around planets as well, a job it was not designed for and performed poorly at. The Tie/Ae was designed to excel at this particular role, although this came at the expence of some of its performance in space. The twin Ion engines are tweaked for atmospheric performance but work less efficiently in space, the solar panels are shaped more like traditional atmospheric aircrafts wings. The fighter itself has the more heavily armoured body of the Tie Interceptor, and has been upgraded to have shields as well, the wings are strengthened and allow the fighter to land on conventional landing pads rather than just the racks that Tie/ln and Tie Interceptors require. These improvements make the Tie/Ae ideal for planet based squadrons, with these fighters based on grounds bases and more conventional Tie Fighters based on planetary defence platorms to give each world complete and efficient fighter protection.