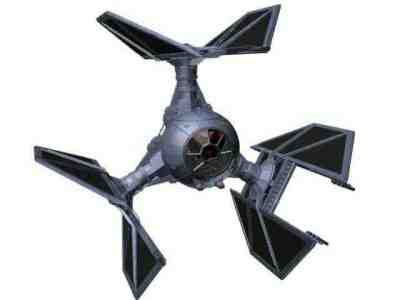 Description: Conventional Imperial design philosophies would not have produced the TIE defender, but the repeated successes of Alliance starfighter pilots forced the Empire's hand. Developed in absolute secrecy by the higher echelons of the Imperial Navy, the deadly new TIE defender was to be an evolution of TIE technologies in a bold new direction. Though labeled as a 'logical advance,' the defender was the Empire's silent nod of respect to the Rebellion's starfighter forces.

Eschewing the swarming wing maneuvers that were a staple of Imperial combat doctrine, the TIE defender would instead empower a single pilot to operate as a formidable fighting force. Unlike the standard TIE fighter, this model featured sturdy deflector shields and a hyperdrive engine, and packed incredible firepower.

Each wingtip holds powerful weapons. The two lower wings each hold a pair of SFS L-s9.3 laser cannons which can be fired singly or linked. The upper wing carries two Borstel NK-3 ion cannons, while the main hull of the craft supports a pair of M-g-2 general purpose warhead launchers. Enveloping the craft are forward and rear-projecting Novaldex shields, which protect the reinforced titanium hull.

Overseeing the TIE defender project was Admiral Zaarin, an Imperial officer who ultimately proved to be a traitor. The foolhardy Zaarin even had the audacity to strike against the Emperor himself. Ironically, his own starfighter project was employed in a bid to stop him. Colonel Maarek Stele and Lord Darth Vader figured prominently in early TIE defender missions to stop Zaarin.

At more than five times the cost of a standard TIE fighter, the TIE defender proved too expensive to produce in large numbers. Only a handful of these ships were deployed as part of Onyx Squadron during the Battle of Endor. The scandal over Zaarin's defection and the political upheaval that followed the Endor further scuttled any plans to introduce the defender to the fleet in mass quantities.


Page designed in Notepad, logo`s done on Personal Paint on the Amiga.
Stats by FreddyB, description from StarWars.com. Image is from TheForce.net, copyright remains with Lucasfilm.
Any complaints, writs for copyright abuse, etc should be addressed to the Webmaster FreddyB.