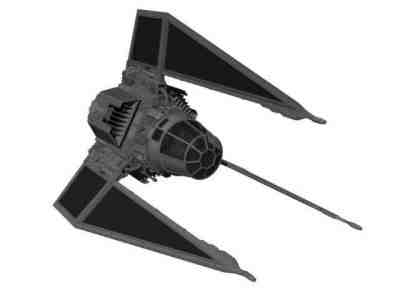 Description: The Tie Phantom was developed by the Galactic Empire before the Battle of Hoth, but due to a rebel assault on its manufacturing plant, it was considered a failure and was never put into large scale production. However after the alliance with the Sith Empire, and war began with the Mandalorians who used Cloaking device equipped ships on a large scale, the Phantom design was dusted off once more. The Phantom uses an imperial design cloaking device, which is more efficient than the Mandalorian design, but suffers the disadvantage of blocking sensors and communication. This has been solved by using narrow band sensor feeds from command ships, but serves as a disadvantage to this design.