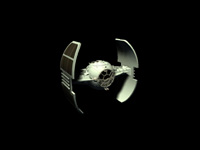 Description: This is the original TIE fighter, that formed the basis for all of the designs the Galactic Empire would eventually use. Designed in the days when the Emperors New Order was just beginning to take control of the Republic, the TIE was sold on the open market unlike its decendants. The orignal features a more rugged hull than the later Tie fighters, but is slower and less manueverable, it also only has a single laser cannon mounted on the chin of the command pod. Although no longer in use by the Empire, the TIE is still used by some companies and pirate groups, but is uncommon even there.