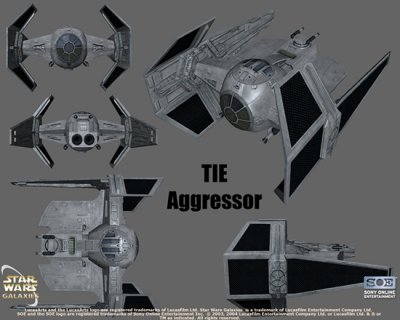 Description: The TIE Aggressor is a heavy fighter-bomber multi-role craft that was developed prior to the destruction of the first Death Star and as a direct response to a perceived growth in the amount of heavy shipping aligned with the Rebel Alliance. Its most obvious design feature is an anti-fighter defensive turret mounted on the aft dorsal surface of the fuselage, and a heavier than normal forward-firing laser cannon battery. The TIE Aggressor is neither fighter nor bomber, but rather something in between. It's a favorite with the more free-spirited pilots of the Imperial fighter cadre who enjoy longer missions away from base where they can be apart from the larger formations normally associated with an Imperial raid on Rebellion re- supply shipping.