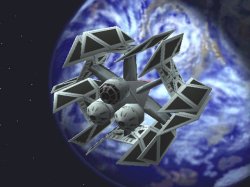 Description: The Tie Armageddon is the largest of the Tie Fighter series of starfighters, and with twin torpedo launchers also packs one of the heaviest punches that a Tie Fighter ever did. The fighter is a development of the Tie Defender, and adapts many of the advances made for the Defender into a Tie Bomber analogue design. The large number of solar panels allow the fighter to generate a huge amount of energy, which is mainly diverted to the shield generators, meaning that the fighter may be a slow large target for enemy fighters, but it can stand up to a lot of firepower before becoming damaged or being destroyed. This allows the Tie Armageddon to deliver its attacks to Rebel or Republic Capital ships with minimal danger to its pilot. This combined with the hyperdrive installed in the fighter makes it one of the most popular new designs with Imperial policy makers since the fall of Emperor Palpatine, however the extremely high cost of the fighter has meant that its production has remained in low numbers, and deployment, luckily for the New Republic, has also remained low.