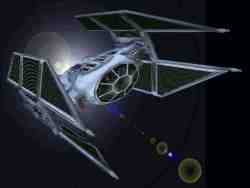 Description: The Tie Avenger is one of the Tie models called the Tie Advanced, and although these include fighter such as Darth Vaders TIE X1, the Tie Avenger was the only one built in significant numbers. Deployed originally before the Battle of Hoth, these fighters were only given to Elite and Ultra Loyal squadrons, due to the fighters power and expence. The design is similar in many ways to the Tie Defender, and although this fighter is not as advanced in a number of ways, its more powerful shields help make up for this, and the fighter is still better than Rebel fighters of its era. The design was retired because of the expence, and the far cheaper Tie Interceptor was deployed in large numbers instead, but after the fall of Emperor Palpatine, Tie Avengers began to be produced again as the remenants of the Empire required better fighters to make up for their reduced numbers. The Tie Avenger is not as common as most other Tie models, but can still be seen with alarming regularity, which is a worrying concept for those who oppose the Empire.