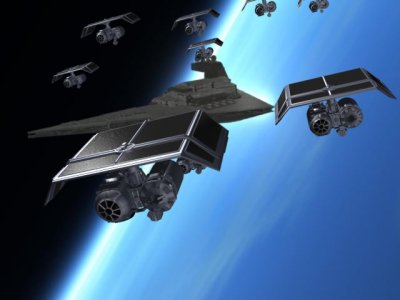 Description: Although the Scimitar Assault Bomber eventually took its role, the Tie Bomber was long known to be have poor performance in an atmosphere. So after Sienar developed the Tie Fighter Atmospheric they were called upon to develop a companion design for the Tie Bomber, and although more costly the the standard Tie Bomber, the Tie Bomber/Ae was significantly better in an atmosphere, and offered no noticable loss of performance in space. However the cost factor meant that the fighter was never built in huge numbers, but did find itself as a very popular choice in ground attack squadrons, and was known to be the best Tie Bomber variant until the Scimitar was introduced many years later. The Solar panel of the Tie Bomber/Ae is horizontal instead of vertical, offering a major improvement to handling in an atmosphere as the wing acts as an aerofoil allowing the fighter to perform surprisingly agile turns and manuevers. In most aspects however the Tie Bomber/Ae is a fairly standard Tie Bomber, allowing parts to be easily interchanged between them, and allowing crew to adapt to the new fighter with a minimum of effort, other good reasons why the Tie Dive Bomber has earned such a good reputation with Imperial forces.