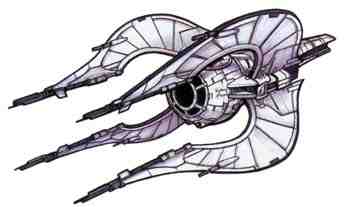 * - The Tie claw has a set of sensitive sensors mounted on the front of its wings these allow a passive scan 120 units in front of the vessel.

Description: After their defeat at Endor, the Galactic Empire was forced back from many of its holdings across the galaxy, and started to have to face the Rebels (now New Republic) on more equal footing. This meant that the Empire had to start adapting some of the Rebels tactics to use against them. Amoungst this was convoy raiding, a job for which the Rebel A-Wing fighter was perfectly designed for, so the Remenants of the Empire approached Sienar Fleets Systems, and asked for a ship with exactly the same role as the A Wing. The Tie Claw was the result, and as a third generation Tie it shares many features with the Tie Phantom and Tie Defender, but at a lower cost than either of these. The Tie Claw is an uprated Tie Interceptor, with a hyperdrive, and a specialised sensor package that allow it to scan convoys from outside their sensor range before deciding to attack.