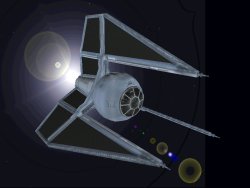 Description: When the Tie Defender was introduced, it was clearly the best fighter that the Empire had ever used, but it was hideously expensive, leading to it only being deployed in fairly small numbers. This meant that the demand for a cheaper version of this vessel was called for, a ship with shields, a hyperdrive and Ion weaponry, so that it could fulfil the same role that the Defender did. So Sienar dusted off the old designs for the Tie Phantom which had laid unused since the Cloaking device project had been abandoned, and reworked them. Using the Standard cockpit module from the Tie Fighter, and the wings of the Tie Phantom gave the vessel four laser cannons (two on the chin of the pod, and two on the left and right wings), the top laser was replaced with an Ion Cannon, while the engine section held a powerful power plant and drive systems. The new vessel was christened the Tie Clutch, and although not hugely better than the Tie Interceptor, it was bought in small numbers by the Empire, which made use of its tough hull, Ion weapons, and hyperdrive for use as an Interceptor and patrol vessel.