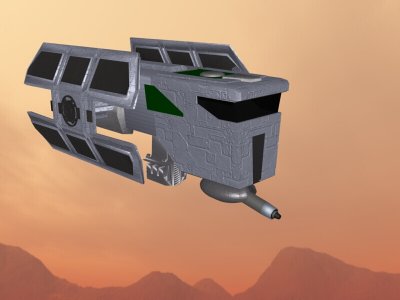 Description: Although sharing some components with the TIE series of fighters, the Tie Air Cruiser is a totally different design, designed to control the skies above planets and provide TIE Bomber Squadrons with Anti Capital ship support. The Air Cruiser is basically a heavily armoured Aerial vehicle with extremely powerful weapons mounted on it, the Turbolaser cannon is capable of large amounts of damage although has a slow recharge rate, being mainly used to smash enemy installations or to destroy entire columns of enemy troops, but is equally good at disabling enemy starships and destroying transports. The Proton Bomb Launcher is similar to that on TIE Bombers, and is a long ranged weapon capable of heavy damage to opponents, and is used as a backup weapon capable of firing more often than the Turbolaser. Air Cruisers obviously need protected due to their erratic fire rate and ammunition capacity, but used properly can swing the scales on the battlefield, however due to their expence the Empire has fielded only very few of these vessels, much prefering to use cheaper more disposable equipment and vehicles.


Page designed in Notepad, logo`s done on Personal Paint on the Amiga.
Text completely by FreddyB. Image is by "Bob the Dinosaur", copyright resides with LucasArts.
Any complaints, writs for copyright abuse, etc should be addressed to the Webmaster FreddyB.