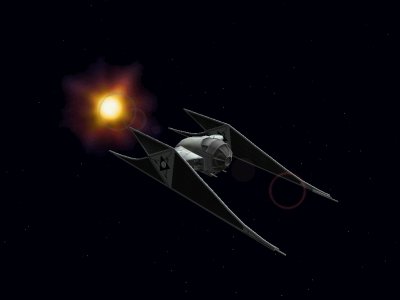 Description: During the turbulent years following the defeat of the Galactic Empire at Endor, the various factions all struggled to prove that they were the true Heir to the Empire. Some of these did this by clinging to the symbols of the Empire, Stormtroopers and Tie Fighters, others did this by moving technology forwards and trying to prove that they were as progressive and innovative as the Empire had been under Emperor Palpatine. The TIE Dart is a vessel that arose during that time, commissioned by one of the Remnants, but adopted by several, the fighter is an evolution of the TIE Interceptor. Using standard parts, the cockpit is a standard TIE Fighter cockpit, although has advanced engines attached to the rear including a small hyperdrive unit. The twin cannons on the chin of the cockpit are augmented by two cannons on the wingtips making the fighter equal in firepower to the TIE Interceptor although its range is somewhat increased, however the new drives make it faster and more manueverable, and the new sensors, shield generators and hyperdrive enhance the fighters capabilities far beyond what the TIE Interceptor was capable of. TIE Darts continue to be used in some parts of the galaxy, although they are rare compared to the more standard types of TIE fighter in use.


Page designed in Notepad, logo`s done on Personal Paint on the Amiga.
Text completely by FreddyB. Image is by Derrick Huntington from a design by "Scarlet Laconius", copyright remains with them.
Any complaints, writs for copyright abuse, etc should be addressed to the Webmaster FreddyB.