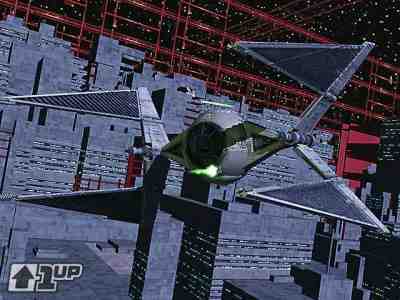 
* : The Tie Hunter has x foils similar to the X-Wing starfighter, allowing it a higher speed when the wings are closed and the weapons deactivated.


Description: This experimental TIE never saw much combat in the Galactic Civil War. The craft was produced in limited quantities and performed relatively well, but was pulled from the lines, due to the Empire's arrogance against using a weapon improved with the enemy's designs. Commisioned by the Empire's elite Storm Commando Corp, the TIE Hunter is an experimental fighter that sacrifices armour and firepower for flight speed. It is equiped with twin laser cannons, a proton torpedo launcher, and twin ion cannons. The design of this new craft integrates the folding s-foil design of an X-wing into the form of a TIE interceptor. However, the high speed closed wing configuration reduces the solar panel surface area so dramatically that no weapons can be fired while the wings are in a closed position. All available energy is transferred to the craft's advanced twin ion engines.

Page designed in Notepad, logo`s done on Personal Paint on the Amiga.
Stats by FreddyB, descriptive text by The New Imperial Federation. Image is from LucasArts, copyright remains with them.
Any complaints, writs for copyright abuse, etc should be addressed to the Webmaster FreddyB.