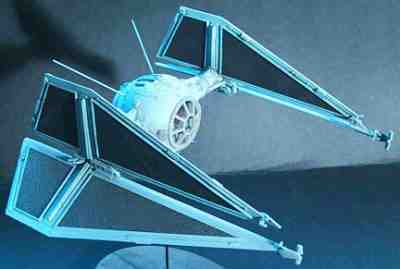 Description: The TIE Interceptor Scout is a replacement for the older TIE/rc Vanguard, based upon the standard TIE Interceptor instead of the TIE/ln frame, making it a faster and tougher vessel. The Interceptor Scout is as fast as the standard TIE Interceptor, but has shields added as standard as it is important that these vessels survive, however the four laser cannons have been stripped off to make room for the advanced sensor equipment mounted onto the vessel. To avoid leaving the vessel totally unarmed the control pod has had the chin laser cannons from a TIE/ln added to it, allowing it to defend itself even if it is not as manueverable as normal TIE Interceptors. The wings have been placed in a different configuration, which was required for the sensor equipment to be mounted on the leading edge of the wings, this also meant that the manuevering thrusters were removed, and less power was created from the solar panels but the removal of two laser cannons balances this loss of power out. TIE Interceptor Scouts are becoming common vessels as older TIE/rc and TIE/rc Vanguards are replaced, however with the Empire forced ever backwards by the New Republic, the replacement process has slowed as the dwindling resources are concentrated into combat vessels.