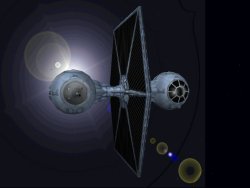 The TIE/e1 mounts a powerful turbolaser on its design. Like its successor the TIE/e2 these fighters can deliver a lot of damage, but their fragility renders them less useful. Over all, the result was less than impressive.