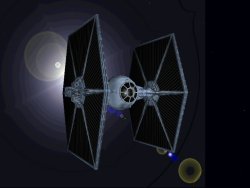 The TIE/e2 like its predecessor mounts starship turbolasers on its design. There is a recorded incident where the TIE/e2's armament came as a deadly surprise to a Rebel B-Wing group patrolling too close to an Imperial base.