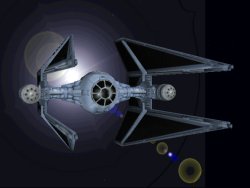 The TIE/e3 is unsurpassed as an inexpensive, expendable and effective platform capable of quickly firing off warheads. It had been suggested that if a piloted version of this fighter existed, it would quickly replace the TIE Bomber as the Empire's favoured warhead delivery platform. There is a recorded incident where an X-Wing squadron was severely crippled by encounter with this type of TIE Experimental.