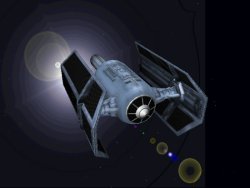 The TIE/e4 carries an explosive payload to its target. It is nothing more than a large, quick and flying guided space bomb. Due to this design's incredible sublight speeds it makes it difficult for ships to evade the TIE/e4.