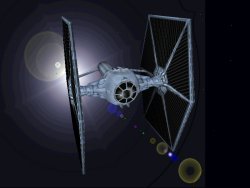 The TIE/e5 has been theorized by the Rebels that it was an attempt by the Empire to replace the TIE Interceptor. Nonetheless, the TIE Interceptor will consistently defeat the TIE/e5 in combat, even though it has a slower sublight speed compared to the TIE/e5. Gwen Habbert, a Rebel pilot encountered this design and was never to be seen again.