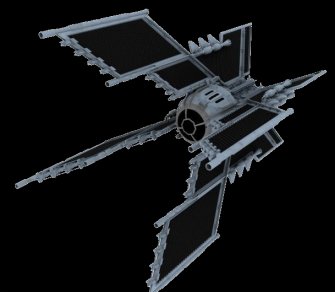 Description: The TIE Predator is a large and speedy TIE variant armed with quad laser cannons and quad ion cannons allowing it to do heavy damage to enemy fighters. The cost of this vessel is prohibitive meaning that it was never produced in large numbers, its lack of missile weapons also mean that it has difficulty damaging larger vessels and capital ships. The Predator is liked by the few squadrons who were equipped with them, but are being forced to deploy them in mixed squadrons as the Predators are damaged beyond their ability to repair or replace. The extended drive section allows them a greater turn of speed than even the TIE Defender, with its hyperdrive and high sublight speed the Predator can intercept even the fastest Republic vessels acting as attack vessels striking quickly or as defence vessels interdicting attacking vessels.


Page designed in Notepad, logo`s done on Personal Paint on the Amiga.
Text completely by FreddyB. Image is from Galactic-Voyage.com, copyright remains with them.
Any complaints, writs for copyright abuse, etc should be addressed to the Webmaster FreddyB.