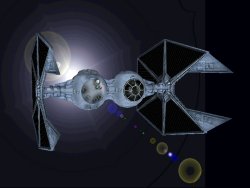 *: The Turbolaser requires a large amount of energy, more than the small engines of a Starfighter can provide, therefore the weapon fires from large capacitors which charge up the energy slowly. This means that the Turbolaser can only fire once every five combat rounds.


Description: The Tie Rapier Gunboat was designed to mount a single capital scale laser cannon within the body of a Tie class fighter. This was done by adding a second cockpit module, much in the same fashion as a Tie Bomber, the second module contains the Turbolaser and related system such as targetting computers and capacitors. The weight of the vessel only slows it slightly because of the dual engines on the back of each cockpit module, which allow a vessel of this size to be surprisingly agile and fast, especially when compared to similar fighters such as the Tie Bomber. The Rapier was originally intended to be capable of surgical strikes against Rebel capital ships, but due to the lack of a hyperdrive, and the difficultly of locating the Rebel fleet the fighter suffered a very poor success rate leading to the abandonment of the design. Tie Rapiers still exist in small numbers, mainly with elite squadrons who have to take out capital ships on a regular basis such as those based on Interdictor cruisers.