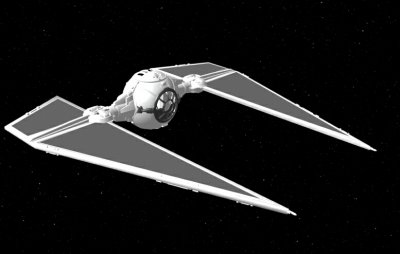 Description: With the Empire always seeking to lower costs and find ways of producing more vessels for the same money, Sienar Fleet Systems developed the Tie Retaliator as a cheap version of the Tie Interceptor. Using the Tie Fighters control pod, and fire-linking the twin cannons in the chin to those on two of the blade panels of a Tie Interceptor, they produced a cheaper fighter, with the same firepower as the Interceptor, and using standard parts already in use by the Empires fleet of Tie's. However the smaller solar panels led to a decrease in performance, both speed and manueverability wise, so the design was retired before production ever began. However after the Battle of Endor, with Imperial resources stretched to their very limits, this cheaper fighter was resurrected and found itself popular with some of the factions of Imperial Remenants, but even then it was only produced in small numbers and is seen only in some parts of the galaxy.