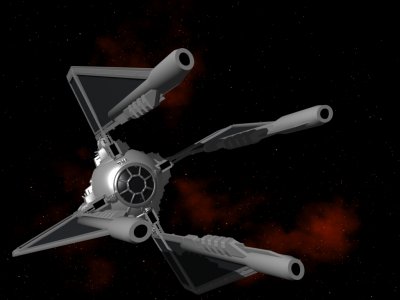 Description: The TIE Retribution is an enhanced version of the TIE Retaliator, with two extra solar panels added which provide a corresponding increase in power and manueverability. The extra power is also consumed by the new heavy laser cannons mounted on the front of the wings, making a fast and manueverable fighter with a heavy punch when required. Other enhancements were the shields, which were added since fighters could no longer be considered as disposable after the Empires defeat at the Battle of Endor and their continuing loss of resources as they were forced backwards by the New Republic. The TIE Retribution is a powerful fighter which began to replace the TIE Interceptor as fighter of choice for some Imperial Factions, however the shortage of resources meant that only a few of these fighters could be purchased, and using rotation of older fighters to inexperienced pilots, and putting veteran pilots into Retributions, these fighters have formed a fearsome reputation rapidly with New Republic pilots.