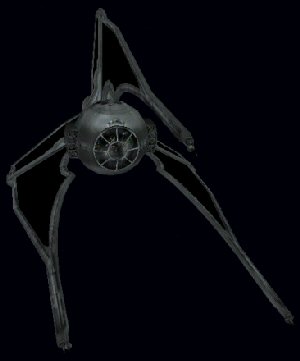 Description: The TIE Shadow is a remodeled version of the TIE Phantom, utilising many of the same systems, but also incorporating some more standard TIE components. Without the cloaking device this fighter is far cheaper to produce, and the larger frame allows the fighter to carry heavier armament than a standard TIE Fighter. The treble heavy laser cannons are extremely dangerous, and the twin missile launchers add punch allowing the fighter to smash enemies. TIE Shadows were designed to provide a long range patrol capability to the TIE Series, extending the fighters range by many times, allowing the Empire to patrol huge areas without having to rely on Capital ships. These fighters were only built in small numbers, and have been pressed into service as patrol and interdiction fighters aiding lighter TIE Interceptors in securing space and capital ships against Rebel attacks.