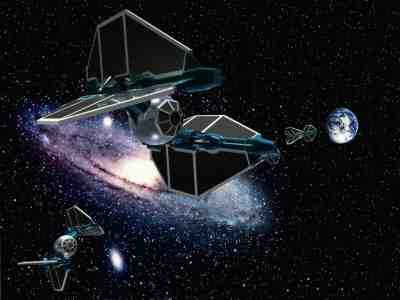 Description: The Tie Smasher was designed around the concept of the SuperHeavy Laser Cannon, and is a modified Tie Interceptor with tow of these weapons mounted. Although slower than the base Tie Interceptor, the fighter is still as fast as the basic Tie Fighter, although it is less manueverable. The Twin SuperHeavy Laser Cannons do a huge quantity of damage, each cannon handing out as much damage as a Proton Torpedo with a significantly longer range than normal laser cannons. However in all other respects the Tie Smasher is a fairly standard Tie design, and the huge expence of the weapons in what is considered an expendable design mean that the fighter never went in large scale production under the reign of Emperor Palpatine. But this was not the end of the Smasher, the design was revived by at least two of the Imperial Remenant forces, and has seen heavy use holding back the New Republic from the territory of these remenants.