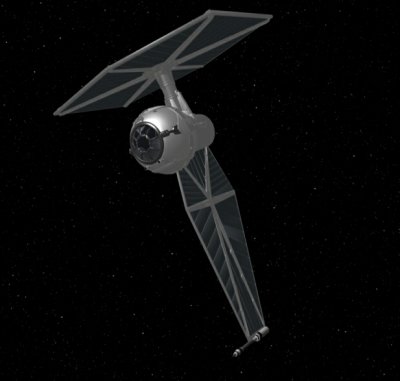 Description: As the Empire was driven back across the galaxy, the fledgling New Republic found itself in possession of many Imperial vehicles and vessels, although only too happy to put to use Star Destroyers, Nebulon B Frigates and various walkers, they were not willing to risk their valuable pilots in the weak and poorly designed Tie fighters they had also become owners of. So when they were approached by a small corporation who offered to take the Tie's off their hands for a reasonable rate, the New Republic were happy to make the deal as soon as they guaranteed that the vessels and parts would not end up in the hands of the Imperial Remenants. Exlon Dynamics, the company involved, had no such plans, and began dismantling the complete Tie Fighters and rebuilding them, along with using the parts they had purchased into this fighter. The Tie "T" Fighter has many features in common with the Tie, but has also had a number of features added to the mix as well, featuring an Ion Afterburner to provide the redesigned fighter with huge speed and manueverability, an extra laser cannon for enhanced firepower, a force shield, and cockpit life support systems, so the pilot need not wear a space suit as required by other Tie designs. The redesign is a huge success, far more powerful than a standard Tie, both more manueverable, and outgunning most other Tie designs. The fighters although disliked for their resemblance to Imperial Ties, a problem which has caused more than one space combat, has sold well as it provides a military standard fighter for less than you can buy many civilian ones for.