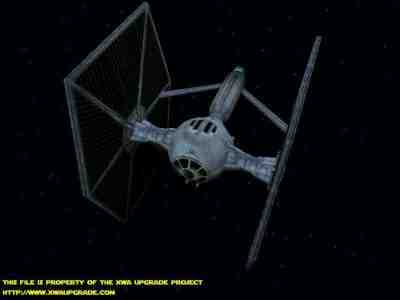 Description: The Tie Thrust is a modified Tie Fighter mounted with a large Ion Afterburner unit that vastly increases its speed, however this speed increase is in a straight line only, and manuevering has suffered because the thrusters have not been upgraded to match the main drive unit. Other systems have been upgraded to match current Imperial standards, such as the Tie Interceptor sensor package and fire control software, and a shield generator to protect this valuable vessel. The Tie Thrust is based on the Experimental M-5, and has not been widely adopted by the Empire, but has found some niche use as a fast Interceptor, although it does not excel in this, or in fact in any particular role, making it a poor choice compared to many other of the Tie variants available to Imperial commanders. However the sheer speed of this fighter is extremely impressive, and this has led to some Imperial factions adopting the vessel in a limited role.


Page designed in Notepad, logo`s done on Personal Paint on the Amiga.
Text completely by FreddyB. Image is by the X-Wing Alliance Upgrade Project, copyright resides with LucasArts.
Any complaints, writs for copyright abuse, etc should be addressed to the Webmaster FreddyB.